In May 2017 ArtsEverywhere.ca launched its first Online Residency with Brazilian artist Mavi Veloso. In collaboration with several other bichas and artists, she will reveal, reflect, confuse, and articulate her ongoing project #iwannamakerevolution, which focuses on transitioning voice techniques / voice feminization therapy for transgender people as a performative tool. During the residency, Mavi intends to create a network of communities in many parts of the globe, be they artists, activists, LGBTQI+ and other interested people, applying ideas and influence to the development of performative material.

#iwannamakerevolution is about displacement, transits and transition, and mutant bodies. It is transdisciplinary research generated by personal experience and observation of contexts. It is a series of trans-media productions (photos, videos, drawings, text, dance, theater, performances, and songs) on subjects of transition and migration:

Mavi started to develop #iwannamakerevolution during her post-master at a.pass in Brussels, Belgium (2015-16). a.pass is an artistic research environment that develops research on performativity and scenography in an international artistic and educational context. She continues to research and develop #iwannamakerevolution as her core project at the Master of Voice program of Sandberg Instituut in Amsterdam, The Netherlands. She is also a Fellow of the Free Home University in Lecce, Italy and Queer City São Paulo, two of Musagetes’ ongoing programs. 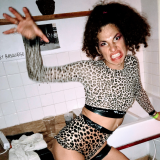 Mavi Veloso is a Brazilian performer based in Amsterdam who works transdisciplinary, integrating visual art, dance, theater, music. Her work explores performativity, the relationship between performer and audience, trans feminism and decolonization. As a transgender and migrant from South America to Europe, Mavi seeks to embody and appropriate the transformation process, psychological, social and physical, conflicts and cultural adaptation procedures, as well as fashion, queer, trans and drag queen elements to question gender technologies, notions of identity, sexuality, placement and displacement. She is currently developing the project #iwannamakerevolution and has presented her work in venues and festivals including the van Abbemuseum in Eindhoven, Kampnagel in Hamburg, Kunstenfestivaldesarts in Brussels, Les Urbaines in Lausanne, 31st Biennial of São Paulo.

The majority of the 2.3 million domestic workers in Mexico live hand to mouth. When strict orders to quarantine at home were put in place in April, many of their employers prevented their household staff from coming to work in order to...

iwannamakerevolution.artseverywhere.ca In May 2017 ArtsEverywhere.ca launched its first Online Residency with Brazilian artist Mavi Veloso. In collaboration with several other bichas and artists, she will reveal, reflect, confuse, and articulate her ongoing project #iwannamakerevolution, which focuses on transitioning voice techniques / voice feminization...

Towards Braiding: A new publication

Towards Braiding, a book available here as a PDF and the accompanying program of artist residencies, gatherings, workshops, and other forms of engagement are part of a learning journey that Musagetes, the organization that hosts ArtsEverywhere, has embarked on to...

Notes on Language: At the Foot of W̱MIEŦEN

ArtsEverywhere asked poets Tim Lilburn and Philip Kevin Paul to write about their experiences as a student (Lilburn) and teacher (Paul) of SENĆOŦEN, the language of the W̱SÁNEĆ—the original tongue of the Saanich Peninsula. Tim Lilburn Behind the shed where I read and...