In 2009, after receiving a commission from Mo`olelo Performing Arts Company to write a new play about the intersection of race, class, and climate change, I embarked on a research trip to Baffin Island, in the territory of Nunavut, in the Canadian Arctic.  With no prior experience, I had only a vague idea of what to expect. What I discovered was a vibrant culture struggling to build an economy and catch up with a rapidly changing world that doesn’t have much patience for those who lag behind.

Carved out of the Northwest Territories in 1999, Nunavut is still in its infancy. It has a young territorial government, very little infrastructure, and almost no economy to speak of. With a population of 32,000 – mostly Inuit – divided into 28 communities, it boasts one of the lowest population densities in the world. There are no trees, no roads (only a handful of streets in each community), no agriculture, few services, and no cell phone towers.

Yet the Inuit have lived there for 4,000 years, and developed a sophisticated culture despite (or perhaps because of) the lack of modern convenience. Experts at hunting and fishing, they have an intimate knowledge of the land and the animals that populate it. Their creation myths – like the story of the siblings Siqiniq and Taqqiq, who became the sun and the moon, or the story of caribou magically emerging from the Earth’s womb – are some of the most beautiful I have ever encountered. Each community is home to accomplished artists – carvers, sculptors, printmakers, weavers, etc. – who continue to tell the stories of their people through their art. A few of them, like Inuit throat singer Tanya Tagaq, have become internationally renowned.

I visited the three communities of Iqaluit, Pagnirtung, and Kimmirut. I met with scientists and government officials, talked to climate change activists and Inuit elders, visited a Coast Guard station, hiked Auyuittuq National Park, and stayed in the home of an Inuit woman. Signs of social and economic hardship were everywhere: open-air dumps, the absence of recycling infrastructure, astronomically-priced (even by New York standards), less-than-desirable grocery items, and alcoholism. However, this was just the tip of the iceberg. Not as obvious to a visitor, but no doubt more pressing for Baffin Islanders, were ongoing housing shortages (most housing is government subsidized), a shortage of teachers and medical personnel, a crippling generation gap where grandparents and grandkids often don’t share a language, and a high suicide rate.

For better or for worse, Nunavut has to develop its economy in order to address these issues, catch up with the rest of the world, and adapt to a rapidly changing climate. Since it is isolated, everything has to be brought in from southern Canada, making the cost of doing business high. However, Nunavut is rich in natural resources and occupies a prime position at the opening of the Northwest Passage where, as shipping traffic increases due to the melting sea ice, significant maritime infrastructure will be needed. The question, then, is how can Nunavut take steps to take care of its own, while still protecting its most precious assets – a pristine environment and a very ancient culture?

These conflicting scientific, economic, environmental, and cultural interests captured my imagination. Many of the stories I heard and people I met, eventually found their way into my play Sila. Equal parts Inuit myth and contemporary Arctic policy, Sila follows seven characters as they see their values challenged and their lives become intricately intertwined. Hopes are fulfilled and shattered, people are born and then die, family ties are severed and rekindled, and not all the issues are resolved, but everyone emerges a little wiser. The play was recently performed at Underground Railway Theater in Cambridge, Massachusetts with seven actors and two beautiful, live-size polar bear puppets.

In Inuit mythology, sila is the primary component of everything that exists. It means air, climate, or breath. As Mama Bear explains to her young cub in the play:

“All life is breath. From the original breath that gave us the miracle of Creation to the world itself, sila wraps itself all around us. (Mama breathes.) See? That’s sila. And with each breath, reminds us that we are never alone. Each and every one of us is connected to every other living creature.”

It will be interesting to see how, in the next few decades, Nunavut will balance its need for economic growth with its responsibility to honor its roots. Luckily, the Inuit people understand, perhaps more intimately than any other nation, that we – humans and non-humans – are deeply interconnected. The road ahead may be bumpy, but with this concept as a guiding light, it will hopefully lead to the right place.

Chantal Bilodeau is a playwright and translator. She also serves as the Artistic Director of the Arctic Cycle and is the founder of the blog, Artists and Climate Change. 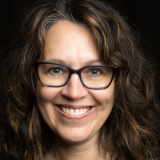 Chantal Bilodeau is a playwright and translator. She also serves as the Artistic Director of the Arctic Cycle and is the founder of the blog, Artists and Climate Change.

Into Sunlight: Dance, Reconciliation, and Peace