In 2012, we unveiled ice sculptures of the words “Middle Class” in public parks in Tampa, Florida and Charlotte, North Carolina. We placed them near the Democratic and Republican National Conventions to draw attention to the economic crisis that has faced working and middle class Americans for over 30 years.

We titled these pieces, Morning In America, after Ronald Reagan’s 1984 reelection campaign. This soft-sell advertising push was a hyper-fictionalized simulacrum of America, as if the artist Norman Rockwell drew the storyboards himself. In retrospect, Morning In America was less the dawning of a new age than the beginning of an even darker twilight. Incomes have stagnated, while healthcare and education have grown beyond the reach of many.

At the Republican Convention in Tampa, we surmounted municipal red tape and the threat of a category one hurricane to mount the piece. On the day we unveiled the ice sculpture, hundreds of protesters from the Service Employee Union greeted us in Lykes Gaslight Park. They marched around the park, assembling behind the sculpture with placards denouncing the Republicans, calling for more equitable taxation and more jobs. The sculpture became a staging area for them as we hoped it would – a real free speech zone, which we streamed live on the internet.

Later in the afternoon, the Occupy Tampa protesters arrived. The police formed a phalanx against the protesters, aggressively trying to block them from the sculpture like a high school football defense team. After the Occupiers dispersed, packs of dogs – pedigrees and mutts – descended; the Dogs Against Romney had come – though these protesters valued the sculpture more as a water fountain than a political statement.

The ice waned throughout the day. Even heavy police presence couldn’t protect it from Hurricane Isaac’s torrential rains and wind, which pummeled the sculpture. Nothing could be done against this elemental assault, and within four hours the Middle Class had completely disappeared.

We set up the Middle Class installation for the second time in Charlotte, North Carolina on the first day of the Democratic Convention. The sculpture in Marshall Park was in the middle of an Occupy Charlotte movement camping ground. After we set up the piece, we were shocked when Occupiers entered our equipment tent to accuse us of being a Republican ploy and encroaching on their space. “You’re melting down the Middle Class, and Republicans don’t like the Middle Class.”

Like Tampa, the Middle Class met its demise in a torrent of rain and thunder. Nature played its part in what seemed an almost biblical tableaux: the Middle Class and all its vestiges melted away, decayed as much from the rays of the searing Sun and global warming, as from the result of politics, corporate power, and the market. Morning In America, alas, did not greet Americans with rosy fingers.

Protesters in Charlotte: People from as faraway as California came to protest the Republican agenda.

Tampa security was augmented by police from local jurisdictions. They were there on foot, on horseback, on bikes and on scooters. The political message wasn’t lost on them, either, one officer said to another, “We’re melting down too, just like the middle class…”

Dozens of dogs descended on Lykes Gaslight Park upset that the Republican presidential nominee had driven hours on a family outing with his pet in a dog crate strapped on top of his car.

Marshall Reese and Nora Ligorano collaborate as the artistic duo LigoranoReese. This is the second in a three part series of their work for the Arts-Policy Nexus. 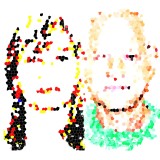 Ukraine’s Battle with Russia Moves to the Classroom

The “Depths:” Visual Culture in the Murder Capital of the World